Mongolia has always appealed to me. It remains one of the few precious places of our planet that can be described as a true wilderness. This automatically engenders the delicious anticipation of facing the unknown and confronting new challenges. We read various guide books, travel blogs and talked to people that had visited the area but were always aware that no amount of planning would cover all eventualities that we would encounter on the steppes of central Asia. So as we came into land at Chinggis Khan International Airport in Ulaan Baatar (UB), the vast open space and rolling hills visible from 30,000ft, became distinct buildings, and the dirt tracks morphed into the main arterial roads of the country’s capital city. We were nervous and excited but keen to start our adventure.

After playing bike Jenga/Tetris we finally got the bikes in the car to take us into UB. Our first introduction to the country’s transport system was provided by our driver heading the wrong way down the main road at 70mph with a car coming straight for us! This was perhaps a little too much excitement!

Over breakfast at a ‘Traditional French Patisserie’ (Prisc our French companion would disagree!), we finalised our plans and hired a man (Davaar) and his van to take us the 600km to the start of our route to explore the Gobi Desert, and then make our way back up to UB. This route, Plan A, was based on our pre-expedition research that indicated there would be numerous nomad ger camps to restock on water, but after discussions with some locals and from what we saw, this was obviously not the case. The unimaginable vastness and monotonous landscape is not an arena to take foolhardy risks so we had to set about coming up with Plan B! After a couple of days exploring the Gobi we headed back to UB – everywhere you go in Mongolia requires passing through UB.

One of the places not recommended for a breakdown is the Gobi desert, but part of adventure is the unexpected! So as our van drew to a halt and Davaar looked anxious, we knew we may not be going anywhere for a while. Davaar set about hitching to the nearest town which was 100km away. Eventually he returned with an oil filter, and with the oil filter changed we set off, only to stop again; the oil filter was not the problem! So we flagged down a van to tow us to the next village 20km away.

The driver of our tow was not the most hospitable and seemed determined to drive like Lewis Hamilton resulting in the tow rope snapping. However, eventually we made it to a village called Hult – not the most picturesque location but one that provided us with welcome shelter. We drank lots of tea mainly to stay warm plus there wasn’t anything else to do, and we sampled some Mongolian TV but that didn’t keep us entertained for long!

We went to explore and came across a huge pig wandering through the village, so of course I took a photo. This resulted in a rather large topless drunk Mongolian man objecting quite animatedly at me for taking a photo of his pig! So we hastily retreated back inside.

After 6 hours it was decided that the van couldn’t be fixed and we were to head to UB without Davaar, or our bikes. We piled into a car complete with a dead sheep in the boot (yes it smelt!). Eight hours later at about 2am we arrived back in UB.

The bikes took two days to get back to us, so trigger Plan C which enabled us to get some hiking in near UB. Then finally, we set off on our cycling adventure!

We started in Kharkhorin (the ancient capital) in central Mongolia and here we experienced the smell of a Mongolian delicacy ‘blow torch hooves’. The actual name escapes me but this is essentially goats legs with the hairs removed by a blow torch. The smell of this was like nothing I have experienced before (and hope never to again)! Before leaving Kharkhorin we explored the Erdene Zuu Khiid, the first Buddhist monastery in Mongolia, and rode up to an ovoo (shaman offering to the gods).

The morning ride was through rolling hills with a traffic jams of goats. The weather closed in bringing rain and freezing fog, so lunch proved a welcome break. The ‘restaurants’ anywhere out of UB are somebody’s house and there is no menu!

The roads were mainly tarmac which we could only dream about later in the trip. The sun came out again for the afternoon and the terrain was much the same as the morning – golden rolling hills with packs of horses and gers scattered on the landscape. Finding a place to camp was not difficult, and with jobs divided up we soon got the tents up, tea made, dinner cooked and some Mongolian vodka sampled! (64.8km, 335.8m elevation).

With a lot of rain overnight we were very lucky to be able to have breakfast and pack up the tents in the dry, as the day got nicknamed ‘the day of rain’. I think that morning of cycling was the coldest I have ever been and I have never been so happy to see a ‘restaurant’ to stop in. The owners took pity on us and ushered us to sit in their kitchen by the stove and plied us with goat milk tea which is an acquired taste that I hadn’t yet acquired! It tastes of gone off melted butter with loads of salt.

Some over enthusiastic drying of socks on the stove resulted in melted socks, and after a much longer than anticipated lunch stop we braved the freezing temperatures and headed into the next valley where we were faced with snow. Thankfully, the wind had changed a fraction and was a little more in our favour so it wasn’t too long before we reached our destination for that day – Tsetserleg (55.23km, 331m elevation).

We climbed slowly out of Tsetserleg to stunning views of the valley floor, and snow covered hills on the other side as far as the eye could see. The descent was interesting with slushy/icy gravel roads. Mongolian drivers seem to ignore this hazard and thundered past us at breakneck speed. Fortunately, the traffic soon died away and once again the roads were empty apart from the occasional motorbike or herd of yaks.

We were blessed with a section of completely flat road and a tailwind which made for some fast cycling, but as always, all good things must come to an end. The hills were back and the wind changed direction but the scenery remained as stunning as ever. We really felt like we had that vast playground to ourselves.

Once our camp site was selected we set about our jobs of setting up the tents and making tea before starting on dinner (cous cous again). Prisc rustled up a great little starter of bread, Mongolian houmous and apple, all washed down with some beer which Jens surprised us with. One bonus of the cold is that the beer was nicely chilled! We also had our first nomad visitor who appeared from nowhere but seemed very happy with our offering of fruit and nuts, and disappear as quickly as he arrived. We watched the sun set then headed into our tents – mainly because it was too cold to sit around outside! (57.13km, 737m elevation).

Next morning we started with some general bike maintenance and porridge (again!). The roads were mainly gravel, we had all developed chest infections, and the wind wasn’t in our favour – so it was pretty hard graft cycling. But we found a little shop and stocked up on snacks and took regular stops for recuperation.

Our aim for the day was to make it to Chuluut Gorge (73km, 373m elevation), which we had been told by a couple we met coming the other way was a good place to camp. We made it and started our well-rehearsed routine for setting up camp. The gorge was pretty spectacular and pretty much hidden until you were almost in it! Dinner was cous cous again, and whilst it is a great cycle touring meal due to ease and calories, we were all getting pretty bored of it!

We awoke the next day to frozen tents, but as the sun slowly came up and treated us to a gorgeous sunrise they began to thaw. Breakfast was porridge… again! Once packed up we started on what was meant to be a short easy day of 45km and 356m of elevation. We were however, treated to a strong and constant headwind, with mud tracks for a road, and big trucks thundering past ridiculously close despite the fact they had miles and miles of space either side of us. So it actually turned out to be one of the toughest days of cycling. We all lost the plot at some point that day!

We were headed for a town called Tariat for our lunch stop but by the time we got there it was about 4pm. Our final destination – the White Lake was only a few miles further on. We popped into the local shop to find you could buy onions and motorbikes at the same time! We also found an actual restaurant for some much needed food.

We left Tariat to cycle the final few miles to the White Lake, and had been told by several locals to camp on the north side of the lake. Jens asked directions and randomly the guy spoke German. Jens, excited that a chance to practise his German had presented itself, meant the directions discussion took place in German, and we ended up on the south side of the lake! As a result we picked up a stray dog along the way which we named ‘Rabies’. She ran alongside the bikes, slept outside the tents and tried her best to play guard dog but just rolled over or hid behind us when other stray dogs approached! So as we settled down to our last dinner of cous cous(!), we watched the sun set and reflected on a challenging but truly amazing trip.

Mongolia – vast, harsh and beautiful. And yes we would all do it again in a heartbeat. 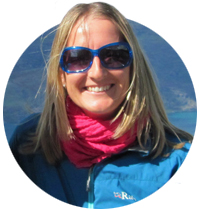 Claerwen loves the adventure of discovering new places – the more remote
and challenging the better! Back at home in the UK, if she isn’t planning her next
adventure, you’ll catch her hiking, biking, running or bivvying – but wherever she is in
the world you will find her with a smile on her face and a cup of tea in hand!