Conquering the Fitz Roy traverse, Patagonia. Every true alpinists dream, and one that few have dared to even try to turn into reality. The seven beautiful and dramatic summits are so iconic in the world of modern alpinism, that Yvon Chouinard used the skyline as the basis for his company logo. There’s even a Fitz Roy clothing range!

So when Tommy Caldwell and Alex Honnold teamed up to give this 4 mile, 13,000 vertical feet route a go, it was no surprise that not only would the outcome be uncertain, but that it was also something of an ambitious challenge. The traverse had never been completed before, and although Tommy had plenty of experience taking on tough alpine routes, it was as much Alex’s bold attitude as his unrivalled climbing ability that drew Tommy to Alex – certainly not his alpine experience.

But in early February 2014, in an environment where ferocious and sudden storms are to be expected, a window of favourable weather enabled this unlikely duo to have their go at making alpine history.

And that they did, completing the route in five days and destroying themselves and much of their equipment along the way. The effort however, earned them the prestigious Piolet d’Or award – something close to a miracle for Honnold who doesn’t even like alpine climbing and doesn’t like the cold!

With breathtaking aerials and rugged mountain scenes, this documentary is a stunning showcase of Cerro Fitz Roy and its six satellite peaks. Sender Films and Big Up Productions have also done a great job of capturing the characters behind this adventure and the sacrifices made to make their dreams come true.

Witty, entertaining and at times moving, A Line Across the Sky is a well deserved winner of the Banff award – Best film: climbing. 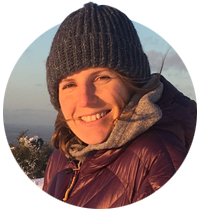 Joey Holmes is based in Cornwall, UK, and runs Cool of the Wild. She can’t get enough of being outdoors – whether that’s lounging around the campfire cooking up a feast, hitting the trail in her running shoes, or attempting to conquer the waves on her surfboard – she lives for it. Camping is what she loves to do the most, but has also spent many many hours clinging to the side of a rock face, cycling about the place, cruising the ski-slopes on her snowboard and hiking small mountains and big hills.